Bangalore – the city I live in India – is notorious for its traffic woes. My office commute is just 8.5km each way but it takes nowhere long as you’d expect in a city as big as Bangalore. A recent discussion at work about the worsening commute times prompted me to analyse my own commute durations. There is one difference though: I commute on a bicycle unlike most of the my colleagues who drive/share/ride a car. I record my rides on Strava, so I was able to get the data out of it and make this histogram: 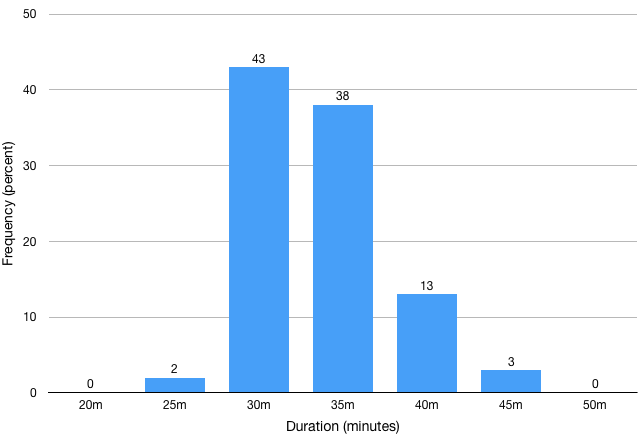 45% of my rides take less than 35 minutes and 83% of them take less than 40 minutes. This is pretty bad considering how short the distance is, but it’s still better than the commute durations of my colleagues who live close to me. According to the discussions at work, they usually take 45 minutes to an hour.

So in short, ditch that car and get a bicycle. Make your cities more bicycle friendly and your commutes healthier.